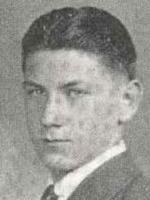 After graduating from OACS Weldon attended vocational school for one year where he studied welding, metallurgy, and machine shop. During World War II Weldon taught welding school for two years at Chanute Field Vocational School before being sent with the United States Army to England as a Combat Division Engineer during the Battle of Britain. He was in charge of two groups of 72 specialists who were capable of repairing almost everything, including B-24 bombers. Weldon traveled all over England teaching American methods to English soldiers. He was in England until the end of combat in Europe before returning to the US and being discharged in 1946. For his service Weldon received a Meritorious Service Award and the Presidential Award from President Roosevelt.

When Weldon returned home he went to work for the Massey Harris Company in Batavia. He worked there as a welding engineer for 15 years until the company closed. At that time he opened his own business, Hilchey's Welding Service, which he operated for over 50 years.

In 1956 Weldon became involved with Troop 6 Boy Scouts of America in Batavia. He worked with the troop and served as scout master for 50 years. Weldon believed his job all those years was to teach young scouts the Love of God-Love of Country-and Love of Mankind. His long service to Boy Scouts made him the longest-serving Scoutmaster in the United States.

In 1970 Weldon was named Man of the Year by the Elba Rotary Club. Twenty-four years later the Batavia Rotary Club named him their Man of the Year. The highest award to be obtained by a Rotarian, the Paul Harris Medal, was presented to Weldon in 1996. He was also recognized for 38 years of perfect attendance in Rotary. In April, 2007 the Batavia Sertoma Club presented its first posthumous awards; the Service to Mankind and Ben Franklin awards were presented to the family of the late Weldon Hilchey, who died Sept. 3, 2006. Weldon is remembered as a man who devoted his life to Scouting and helping others.