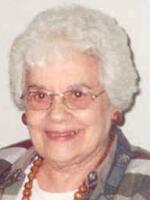 Rose is known by generations of Oakfield-Alabama families and alumni. As a language teacher for 32 years at OACS, she can point proudly to hundreds of people who, even though "tempus fugit," still know that the answer to the plea, "S'il te plaît, maman - encore cinq minutes!" is "Pas question! Il y a beaucoup à faire." There was always much to be done! In addition to leading students of varying ability into the worlds of French and Latin with style and poise and humor, she served as advisor to the French Club and established the tradition of trips to Quebec and France in the early 1970s. She also advised the AFS (American Field Service) Club, which annually hosted visiting international students who attended OACS. Rose was longtime organist at St. Cecilia's in Oakfield, and a charter member and three-year board member of the Oakfield Historical Society. She continues her position on the planning committee for the annual OACS Alumni Reunion, which attracts hundreds of former graduates from as early as 1932. To keep abreast of developments in her former profession, Rose continues membership in a number of professional organizations. Bien fait, Mme Mead!