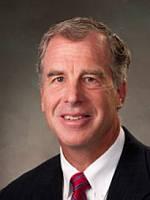 Peter graduated from OACS in 1975, the same year he helped to lead the OACS boys Varsity basketball team to a Section V championship. After graduating, Peter attended Cornell University where he earned a BS in Agricultural Economics. While at Cornell, Peter excelled academically and played on the Cornell Varsity basketball team which earned him NCAA academic All-American honors in 1979. His other academic achievements after Cornell include being a graduate of the Empire State Food and Leadership Institute (LEAD NY) and a graduate of the Executive Program for Agricultural Producers at Texas A&M. After Cornell, Peter's career path was never in question, as he always planned to return to his roots in Batavia, NY where he would join his family owned and operated farm. After more than thirty years of ownership and successful management of MY-T Acres, Inc., Peter, along with his family and many talented employees, have made this agricultural enterprise one of the leading farming operations in the State. In 2012, the New York State Agricultural Society honored My-T Acres, Inc. as the business of the year.

Along the way, Peter has continued to advance his professional and civic contributions. On a professional level, he is either currently serving or has previously served on several boards of directors including Seneca Foods (current), Pro-Fac Cooperative (current President), Farm Fresh First, LLC (current) and Birds Eye Foods (previous). He is currently a member of the NYS Agricultural Experiment Station advisory council, the Cornell University Agriculture and Life Sciences Deans advisory council, the Cornell University Council, the New York State Vegetable Growers Association and the Genesee Country Farm Bureau.

Peter has also generously given back to his community. He has provided years of community service to boys and girls in the region, providing facilities and donating time and attention to many student athletes. He has been a role model and mentor for numerous youths who have gone on to excel academically and athletically at the collegiate level. Additionally, he is currently a member of the Genesee Community College Board of Trustees, the United Memorial Medical Center Board of Directors, and has previously served as a board member for the Town of Batavia Zoning Board of Appeals, the Genesee area YMCA, the Iroquois Trail Boy Scouts of America and the Genesee County Cooperative Extension.

Peter's professional achievements combined with his history of service to both his industry and the community in which he lives makes him a role model for all current and future OACS graduates.