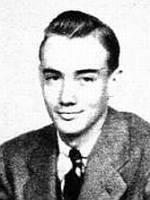 Salutatorian of the Oakfield Class of '44, Ken Bradt went on to Syracuse University where he earned BA and MA degrees in psychology. He earned his PhD in 1951 in psychology at Northwestern University in Evanston, IL. Ken started out as a chemistry major, but switched to psychology when he became interested in the question of why people do what they do.

After obtaining his PhD Ken served in the U. S. Army Medical Service and achieved the rank of 1st. Lieutenant. While in the army he served as chief clinical psychologist at the US Army Hospital at Camp Atterbury, IN, and eventually served as a research psychologist with the Department of Defense in Washington, DC.

From 1959 to 1980 Ken was an adjunct professor at American University, George Washington University, and the University of Virginia. As an Associate Professor of Organizational Psychology at George Mason University in 1981 Ken originated one of the first graduate-level courses in organizational leadership in the country. During the 70s Ken also served as Chief Psychologist with the US Central Intelligence Agency. Since 1981 he has been a consulting psychologist and leadership trainer, helping hundreds of managers in business, industry, non-profits and government to become more effective and more humane leaders in their organizations and communities.

Ken is deeply indebted to his high school for laying the groundwork for everything he has achieved, and especially to his French teacher, Kenneth L. Lamb, with whom he feels he shares this honor, and who passed away at 94, just weeks before Ken Bradt's induction.