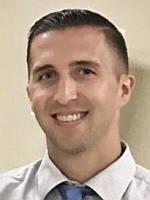 Justin graduated in the top 10 of his OACS class, earned spots on Genesee County All-Star teams in varsity football, basketball, and baseball, and was a drummer in band and Jazz Band.   It was in high school where he was inspired to pursue a career in medicine after watching his grandfather struggle with a brain tumor; during his senior year he began his journey by participating in Health Careers Academy.

Justin majored in molecular biology.at Grove City College, developing a passion for “serving the underserved” after participating in a medical mission trip to the Dominican Republic, He continued his education at St. George’s University School of Medicine, an international medical school, with students representing nearly 100 nations.  Located in Grenada, West Indies, St. George’s  gained him exposure to local hospitals of underdeveloped countries.  Justin graduated 1st out of 350 students in his St. George’s class.

Jusin returned to Western New York to complete his pediatric residency at Strong Hospital in Rochester, then moving to New York City, where he completed a 3-year fellowhip in pediatric cardiology at NYU Langone Medical Center.  Under the mentorship of internationally-renowned cardiologists met there, he developed into a “publishing machine” with 19 publications in peer-reviewed medical journals and 2 textbook chapters.  To put his accomplishments into perspective - most fellows only have 1-2 publications at this time in their careers.

Justin turned down several job offers, including one to become the “Director of Medical Imaging” in Orlando, which would have made him the youngest person to such a position, eventually choosing to move to Cincinnati for the research opportunities their program offered.  Justin is currently working in advanced cardiac imaging and continues collaboration with his UK-based mentors.

Justin is a devoted husband and father to three children.  He values the foundation and experiences he was provided at Oakfield-Alabama, and loves to return to his hometown to visit his family and introduce his children to the community and school that he grew up in.  Justin’s career continues to grow with his continued devotion to global health and contibuting to the advancement of the cardiovascular and medical imaging fields.