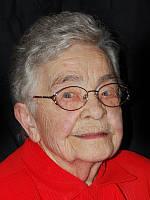 Following graduation from OACS in 1944, June attended Cornell University where she earned a certificate in basic aircraft engineering and drafting. Since earning her certificate at Cornell, June has had a fulfilling and varied career that has included employment at Curtis-Wright in Buffalo, NY as a drafter, at the Army Air Force base in Buffalo as civilian employee, as a co-owner and operator of a dairy farm and as a housewife for 52 years. She has also completed additional coursework in grant writing, genealogical studies, computer studies and flight school.

In addition to her efforts on the historical societies, June was the organizing regent for a new Daughters of the American Revolution chapter in Elba (now Batavia), which she named the "Anna Ingalsbe Lovell Chapter." The chapter started in 2002 with twelve members and has grown to 30 members. June is currently the historian and publicist for June has given documentation and assistance to several published genealogies that are now a part of the Library of Congress. She has also written articles for the Daily News on the Depression and the home front during World War II.

Over the years, June has demonstrated outstanding leadership by helping our local communities preserve their history for generations to come. She has selflessly donated countless hours of her time to these efforts. Her history of giving back to the community makes June a role model for all current and future Oakfield-Alabama Central School graduates.