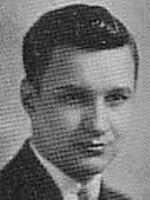 Buck Betters embodies the self-made success story who makes his hometown and nation a great place. A year after graduating from Oakfield at age 16, he became Western Union's youngest manager in the world in Chautauqua, NY. After serving in military intelligence overseas in World War II, he returned to Oakfield, where he worked for George W. Haxton & Son, interrupted by a return to active military duty for the Korean War. In 1956, Buck started Betters Food Sales. In four years, it had become one of the preeminent frozen food brokerages in the United States. Other spinoffs and business involvement for Buck have included the Scotch Game Call business purchased in 1964, and radio and cable television operations in Haiti and Newark, NY. In what little free time he has had, he has given to the community in many ways large and small, served his country as a diplomatic envoy, and served on several national food boards and on the hospitality board of RIT. The Oakfield All-Men's Annual Prayer Breakfast, which he co-founded in 1966, remains the largest event of its kind in the United States.