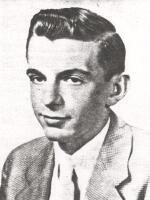 Don Boyce grew up in Alabama, rose through the local, then national, business world, and never forgot his deep roots in western NY. His role as controller of Akron's Strippit led to his becoming acting president of the company, then Corporate Treasurer and eventually CEO of its parent company, Houdaille Industries. From 1988 to his retirement in 2000, Don served as Chairman of IDEX Corporation, a NYSE-listed manufacturing company, with much of that time also spent as IDEX's CEO, President, or both. During his adult life in Oakfield, he was active in the United Methodist Church, and served for seven years on the OACS school board. Honored in 2001 by his college alma mater, Rochester Institute of Technology, for being among its outstanding alumni, Don continues to serve on its Board of Trustees. He and his wife Jeris (also from the OACS Class of '55) have endowed a scholarship there, targeted for students from western NY and especially Genesee County, so that future students like him, from small towns, but with big dreams and bigger ability, can reach their potential as well.