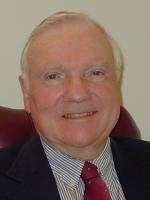 President of his OACS graduating class, Dale went on to Rensselaer Polytechnic Institute, where he lettered in football and majored in chemical engineering. He began a 38-year career with Mobil Chemical upon his graduation from college, soon becoming a refinery manager on his way to becoming one of Mobil's top 100 executives out of more than 50,000 worldwide employees. With Mobil, Dale earned a reputation as a visionary leader whose technical expertise and business savvy could be put to work saving some of the company's worst-performing facilities, a feat he accomplished with three different refineries, saving more than 1,000 jobs and winning citations for his achievements. Aside from his Mobil duties, Dale made time to be President of the United Way in two different communities, and president and vice president for Chambers of Commerce in two different regions. His applying some of his successful business practices to United Way fundraising - particularly creating a tiered recognition system - resulted in substantial increases in donations. Dale's civic work, and the impact he had on saving jobs in multiple communities, won him recognition in interesting ways: The Joliet Rialto Theater awarded him a seat. Another refinery town made him its "Man of the Year."