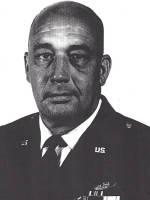 Ernest B. Shepard was born in Presque Isle, Maine, but moved to the Town of Alabama, NY at an early age. He graduated from Oakfield High School in 1934 and went on to attend Geneseo State Teachers College. After completion of studies at Geneseo, Ernest taught for four years at Warren Harding Junior High School in Rochester, NY.

Ernest then decided to serve his country and enlisted in the United States Air Force where he served in active duty from November 3, 1941 until his retirement on August 1, 1968.

Shortly after his enlistment the United States entered World War II where Ernest served with distinction as a Fighter Pilot with the 316th Fighter Squadron. While with the 316th Ernest flew 80 combat missions in the North African, Sicilian and Italian Campaigns. During these campaigns he is credited with shooting down two enemy Messerschmitt 109 Aircraft.

As WWII progressed Ernest was transferred to the European Theater and was attached to the 384th Fighter Squadron. Here he served as a fighter pilot and Fighter Squadron Leader on 35 additional combat missions and shot down one additional enemy aircraft. Because of his leadership skills Captain Shepard was selected to serve as Squadron Operations Officer and was promoted to the rank of Major by February 1945.

This young man from the Oakfield Class of 34, who went on to become a P-51 Mustang pilot and squadron operation officer, was awarded the Distinguished Flying Cross "for extraordinary achievement while serving as pilot of a P-51 airplane on bomber escort mission s over Germany and German occupied countries from September 9, 1944 to January 3, 1945." He was recognized for demonstrating an unfailing initiative and exemplary devotion to duty. Ernest B. Shepard served with distinction as lead pilot of a fighter group and fighter squadron on 14 missions. His outstanding leadership and outstanding airmanship resulted in the successful completion of these operations without loss of personal.

Colonel Ernest Berryman Shepard passed away February 27, 1980 at the age of 62.